Are investors moving away from active target date funds into their passive counterparts? 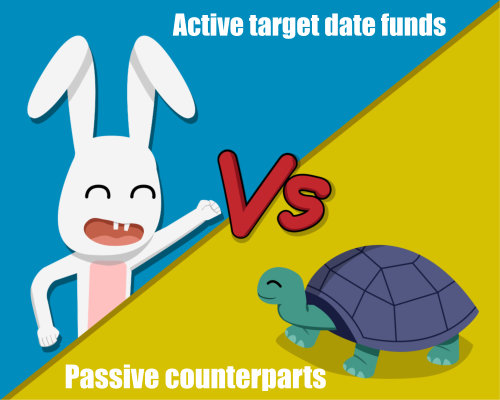 InvestmentNews recently reported that actively managed target date funds are quickly losing market share to their passive counterparts. Currently active target date funds hold $570 billion while passive hold $480 billion in assets across the entire market. Over the past few years nearly all new incoming investments into the target date category have all gone to passive funds. A lot of the reason behind this may have to do with the recent rapid cost cutting of fees in mutual funds across the board. Now that there are so many funds with low cost anywhere you look, it’s hard for plan sponsors and advisors to recommend their clients to pay for something more expensive. However, a greater question to this is how the markets will be going forward with so many assets going into passive funds. With general trends shifting away from active managers, how will the advisors and their clients cope when inevitable market correction occurs? Checking now to be sure that your clients are invested in funds that are suitable for them is as important now as ever. Why are Americans financially regretful? In a recent survey from Bankrate, we learned about why so many American have financial regret. In fact their survey revealed that 76% of Americans have some kind of regrets when it comes to their finances. Additionally, the results aren’t as surprising as you would think. The number one regret by Americans surveyed was that they did not start saving for retirement early enough (27% in fact). Followed by saving for emergency expenses, taking on too much credit card debt, and taking on too much student loan debt. Clearly saving for retirement is a big worry for many Americans. However, after you break it down by age group, we also see that this is a worry disproportionately affecting baby-boomers who are quickly approaching their retirement. Meanwhile, millennials most regret their student loan debt.  Additionally, the oldest generation (74+) are the most confident in their financial decisions with the least amount of regret. Honestly, these numbers do not seem all that surprising the different stages of life that each group is in. Those that soon to plan to begin retirement are worried about their nest egg. While those that are fresh out of university are most worried about their new student loan payments. Perhaps the most interesting statistic in this survey is that such a huge amount of the sample have so much financial regret. Clearly most Americans’ are victims of some kind of financial stress or another. Financial education remains such a critical concept for people across the country.