C’mon Baby, Tax the Rich: The Elephant In The Room 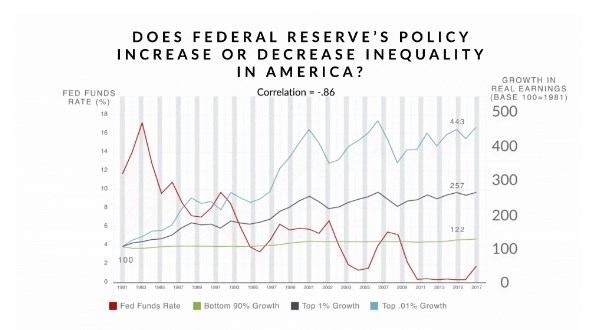 I would like to follow up my colleague’s top notch research note HERE on the consequences of dramatically increasing taxes on the wealthiest Americans. I will start out by saying that I believe this to be an unproductive idea, but my reasoning will be very very different from most comments on the topic. And you will see, that while I believe this idea to be extremely unproductive, I will pinpoint the actual source of the problem and what needs fixing in order to justify the anger among middle and lower income families.

With that let’s delve right into the reasons for why we are having this discussion in the first place. It is plain as day that inequality or wealth gap has been increasing dramatically in the United States. Take a look at this animated chart:

As you can see from the animation above, inequality started rising in the early 1990’s when wealth of the top 10% of richest families took off.

Now what happened in early 1990’s? That is right, an Honorary Knight of the British Crown Alan Greenspan finally flexed his muscle and tried his first dramatic reduction in the Fed Funds rate from under 9% all the way down to below 3%. Such dramatic rate reductions have only been done in the past for a short period of time after rapid rate increases, as a monetary tool to restart the economy after soaking up the liquidity with high interest rates. Alan Greenspan did start to normalize the rate in 1994. However, it is here that something broke down in the checks and balances of the US Financial system. Instead of increasing the rate to a more normal level and keeping it there, Alan Greenspan took the US financial system on a downward financial spiral that were to end very badly in 2008. It is not a coincidence that the chart above (which shows the Fed Funds Rate) appears to be almost the inverse of the top 1% after-tax incomes above.

Who benefits from low rates? Theoretically, everyone who owns assets, such as a home (and that is how that low rate idea was sold to the American public). In reality, the beneficiaries are those that own massive assets which are relatively liquid. Your own home is not a liquid asset and you cannot really gain any profit from its appreciation unless you sell and move to a cheaper house, something people are just not willing to do often for some reason. What’s wrong with you, couch potatoes?! But if one owns three homes, lots of stocks and bonds plus other assets you get a disproportionate benefit from low rates in numerous ways. Firstly, the advantage is due to the size of the assets and simple rules of compounding, Secondly, due to the liquidity of investments allowing you to shift assets and to take advantage of opportunities quickly. The gap between capital gains and ordinary income taxation completes the trifecta.

I am not sure exactly how much math Alan Greenspan has studied, but my guess is that he knew these things back then better than I know them today. But he went ahead with his strategy and fawning press treated him like a demigod, plus the Queen knighted him in 2002. Of course, not everyone fell for the act, and such different people as Ron Paul and Bernie Sanders aggressively questioned Greenspan about his approach right around the time of his knighthood. Watch this video:

– very informative. And that is, ladies and gentlemen, how our inequality gap was born and grew.

Of course, Greenspan handed the reins off to Ben Bernanke. Bernanke tried to normalize the rates in 2006-2007, but it was too late. The financial system was addicted to low interest rates. Essentially, we had a classic Minsky Moment. Hyman Minsky was an innovative economist who developed a theory of how market crises develop. In some sense, his theory is merely an elaboration on the work of the so-called Austrian school of economics. But Minsky’s work was framed in a more neutral, less ideological, tone and received wider acceptance. Essentially, Minsky observed that long periods of interest rates caused businesses to gorge on debt. Thus, sound businesses become leveraged and if rates rose, they had a hard time  paying off their debts.

During the cheap capital phase riskier businesses started employing what Minsky called Ponzi finance. Essentially, the term Ponzi finance means that entities cannot even keep up with interest payments if rates rise. A crash ensues when balance between those types of entities is tilted toward risky and Ponzi finance. All of this is common sense and if you are surprised why this is treated as a major economic discovery, you are not alone. This is not to belittle Minsky who was a brilliant man and was able to scale economists’ ivory tower walls to get this concept into the economic mainstream.

However, what Greenspan and his successors realized is that we don’t need to raise rates at all. So, the Minsky moment can be put off forever (or at least until someone’s term is over). Ben Bernanke tried to get out of this paradigm briefly in 2007 and got stuck with one of the biggest economic calamities in history. He took the rates quickly to zero post 2008 collapse and promptly kept them there, followed by massive asset purchase dubbed QE1[1], QE2, QE3, QE4, leading some observers to coin a term QE4EVR.

Ironically, more than ten years from 2008, a new Fed Chair Jerome Powell tried to gingerly raise rates away from zero. After only two hikes and getting the rates to a paltry 2.5%, Powell essentially ‘caved to the market’. That according to Jeffrey Gundlach, undoubtedly the top investing mind in the world in 2019. He even hinted at QE5, so the QE4EVR moniker may have been spot on. So, it looks like the top 1% are just doomed to keep increasing their assets, since after the cave by Powell, the stock market has hit record highs.  And the ‘cave’ happened during the roaring job market. So, Fed gave up any sort of pretense that it now targets unemployment level, which would at least make the whole situation a bit more equitable.

To be sure, the source of the problem is not in the level of the rate per se, but rather in the mechanisms by which that rate disproportionally benefits holders of assets. The period of 1960’s also saw very low rates, but without spawning similar inequality. That is because banking as an industry was highly regulated and constrained following the lessons of the Great Depression. It is not that 1960’s excessively low rate was not problematic, it was set up the stage for the general economic malaise and stagflation of the 1970’s. But dismantling of Depression-era regulations created an environment where low Fed rate supercharged asset growth leaving middle class in the dust. It is ironic that Alan Greenspan played a role in that too, being a fierce advocate of deregulation in the financial sector.

After the crisis, he conceded that it was a mistake to deregulate financial sector, but even that he said he suggested that regulation is not necessary now due to the trauma of financial corporations following a 2008 crash. Whatever regulatory changes are made, they will pale in comparison to the change already evident in today’s markets,” he said. “Those markets for an indefinite future will be far more restrained than would any currently contemplated new regulatory regime.”

Let Them Get Some Assets

“Let them eat cake” is an apocryphal phrase attributed to French Queen Marie Antoinette. She never actually said those words, because the first time they appeared in print by Jacques Rousseau, she was only nine years old. However, the phrase unfairly stuck to her as a symbol of excess and disconnectedness of elite from the masses. While the phrase “Let Them Eat Cake” is fake, we have a real counterpart in today’s world: Janet Yellen. In her speech “The Importance of Asset Building For Low and Middle Income Families” she said exactly this:

“The housing market is improving and housing will remain an important channel for asset building for lower and middle income families. But one of the lessons of the crisis, which will not be news to many of you, is the importance of diversification and especially of possessing savings and other liquid financial assets to fall back in times of economic distress….” (Source)

So, you see. You need to possess the liquid financial assets and diversify, so nothing to worry about. So what if your single residence that you may or may not own is illiquid (because you have to live there!). Just get some liquid assets, and it better not be beer or whiskey (hangover is not an asset). Let them eat cake indeed.

Popularity of extreme taxes on wealthy people is just a symptom of a much deeper underlying problem. It is a symptom of widening inequality gap and that gap itself is largely the result of privatization of gains and socialization of losses i.e. bailouts & Quantitative Easing. Implementing such a tax is like putting a band-aid and an anesthetic on an infected wound. It will only mask the problem for the time being, while not solving the real problem. This is true even while assuming that the top earners will not apply regulatory arbitrage to move their capital to a place where conditions are move favorable.

The solution? It would be far more reasonable to start normalizing the financial system by creating a truly free market, breaking up financial and tech monopolies and bringing back real competition. And while at it, limiting Fed’s ability to manipulate money supply, so that the playing field is more level. These steps would not be without short term pain, but the restored free market with a level playing field would create opportunities and upward mobility for low and middle class that would make the punitive tax unnecessary.

[1] QE – Quantitative Easing, a broad name of programs whose goal is to increase money supply and encourage liquidity flow in the financial economy.