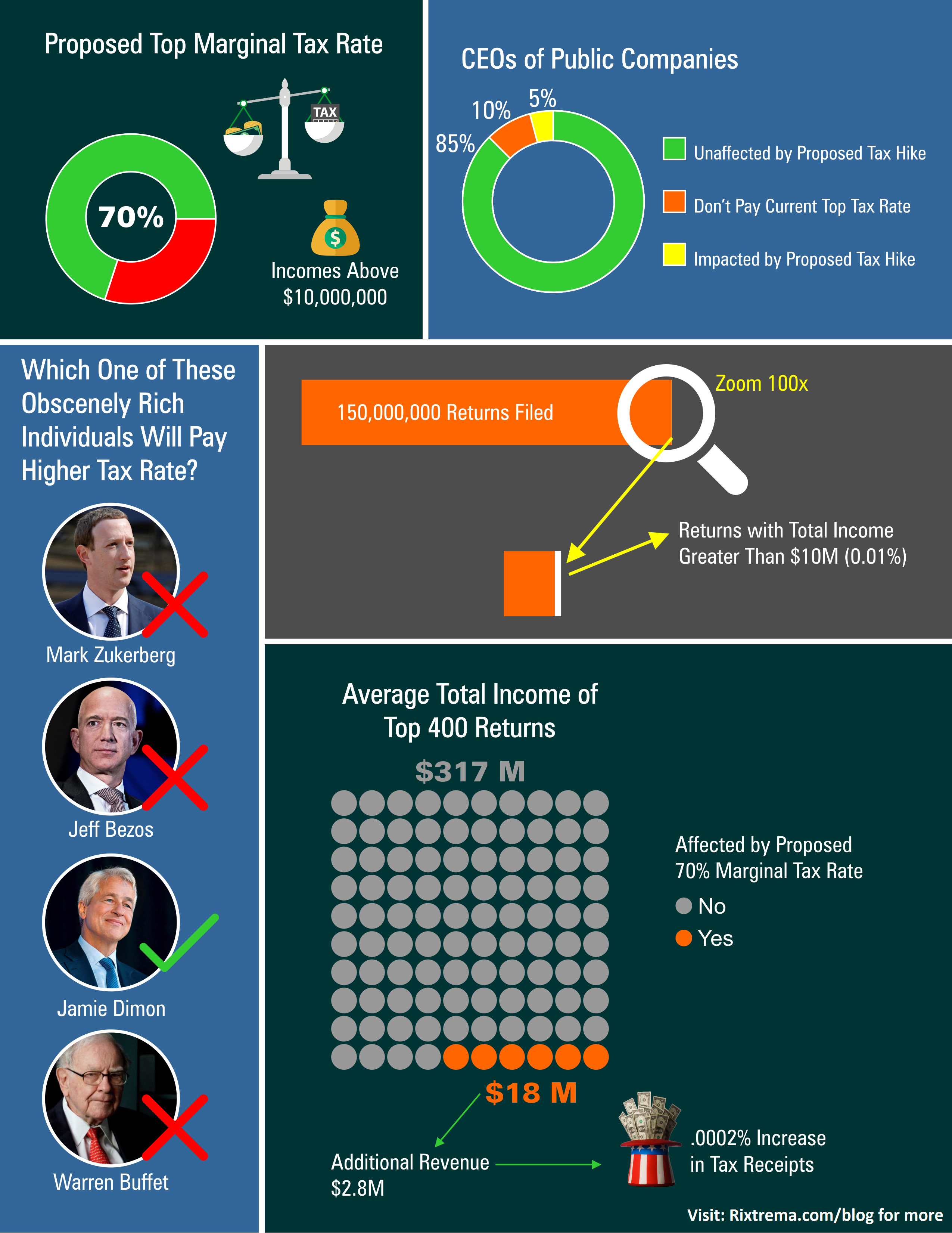 Taxing the rich is not a new idea by any means. But the call to take more money from them has become louder. People with some power to act have begun to unabashedly call for higher taxes on the rich.  Much to the chagrin of many wealthy Americans and those in attendance at Davos for the Economic Forum (and likely many readers of this blog), the idea is gaining momentum. Those in Davos were caught between taking it seriously and dismissing it as fantasy. My former boss, Scott Minerd, Global CIO of Guggeneheim Partners said “It’s scary…I think the likelihood that a 70 percent tax rate, or something like that, becomes policy is actually very real.”

While there is bipartisan appeal of taxing the rich, the most vocal proponents are on the left with newly minted congresswoman Alexandria Ocasio-Cortez and Massachusetts senator Elizabeth Warren leading the charge.  Ocasio-Cortez has called for 70% marginal tax rates for filers with incomes above $10M, while Warren has proposed taxing acquired wealth. The proposal from Ocasio-Cortez actually has some momentum behind It. A recent poll from The Hill and HarrisX shows that 59% of those surveyed support imposing a 70% marginal tax rate on high earners (including 45% approval from Republican respondents).

Since our clients are people whose clients may actually earn enough to be impacted by this tax rate, I thought I would look the issue in a bit more detail. And since proposals are notably lacking at this time, I will simply focus on a 70% marginal tax rate at incomes greater than $10M with no other changes to the tax code.

First, as almost any article you read on the subject will mention, a 70% top marginal tax rate is not without precedent in the US, in fact, from 1934 to the 1980’s it was the norm. The exhibit below shows the history of the top and bottom tax rates in the US. It is likely that you have seen it before.

Also notable, when converted to 2018 dollars, the tax rate on incomes as high as $10M isn’t unprecedented. The income data in Exhibit 1 is not inflation adjusted. In 1951, for example, top earners paid a 91% marginal tax on incomes above $400K, which is the equivalent of $3.8M in 2018 while the marginal rate above $5M in 1936 would equate to about $90M today, far higher than the proposed $10M. But that only lasted for a few years (then they raised the marginal tax rate while lowering the income threshold required to pay it.  From Exhibit 2 we can also see that historically the top marginal tax rate was applied to incomes that, in real terms, are far higher than those in place today.

Note: The income axis (right) is intentionally set to $10M. The inflation adjusted incomes of the early 1900’s have a break to indicate that they far exceed the $10M threshold.

One of the big problems with raising taxes on the rich is that they are very good at avoiding paying them. While researching this topic, I came across an interesting Bloomberg Opinion piece by Stephen Mihm, that examines the long and difficult history of trying to get meaningful revenue from punitive taxes on the rich. In one anecdote, Mihm tells that in 1935 when taxes were raised to 75% on incomes over $500,000, the only American to pay that rate was John D. Rockefeller Jr. (note the data used in the anecdote differs from the data I pulled from the IRS site, I have asked Mihm for his source and I will update this post if I hear back). At the time, John D. Rockefeller Sr was the wealthiest person in the U.S., but he didn’t pay the top marginal tax rate, only Junior did. Henry Ford was on his way to becoming the wealthiest person, and he didn’t pay that rate, nor did J. Paul Getty or Joe Kennedy (patriarch of the Kennedy family who’s wealth was gained around the time of the Great Depression). They avoided it.

Since dividend and capital gains are taxed differently than ordinary income, I wanted to get a sense for how much top earners made in salaries and income. Data from the IRS in 2016 (the latest data available) shows that there were 16,087 individual tax returns that claimed adjusted gross income levels greater than $10M (while noise has been made about this tax affecting the 0.1%, the number of top filers in this category actually represents .01% of the 150M individual returns filed in 2016). And this is adjusted gross income greater than $10M. That is different than salaries and wages, above $10M. The average adjusted gross income for these filers is $25.5M, so the number of filers in this cohort that has more than $10M in wages and salaries is likely far less than 16k filers, but this data is hard to come by.

To get an estimate of how many filers might be have salaries and wages high enough to be affected by the proposed rules, I went to a list curated by Bloomberg that collects data on CEO pay for 887 publicly traded corporations. After all, these are likely the people that the general public thinks about when they think about taxing the rich. People like Facebook’s Mark Zuckerberg, JP Morgan’s Jamie Dimon, Jeff Bezos of Amazon, and Berkshire Hathaway’s Warren Buffet. I would be willing to bet that the Hill-HarrisX poll referenced earlier would be able to break 80% approval for higher taxes if they simply asked their poll question like this:

Q: The man pictured below is worth $54Bn and pays very little in taxes. Do you think he should pay more taxes? 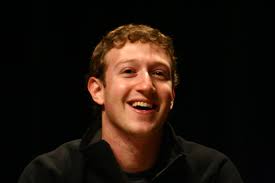 No, I think he and Facebook should be tax exempt

Source: No survey ever given, either in the past or in the future.

The Bloomberg list breaks out compensation by salary, pension & deferred compensation and other awards (which includes cash, stock & options). I added the cash portion of awards to the salary to get a sense of total salaries and wages paid to the executive that would trigger the proposed top income of $10M. Only 41 of these executives would breach the $10M income level with an average taxable income level of $14.6M. Assuming a straight tax with no deductions, this list would pay an extra $650M in taxes.

Of course, that is a huge assumption that is not likely to be based in reality. The top tax bracket today starts at $600k so these executives are indifferent at levels above that. And speaking of the current limit, 90 executives on that list claim salary and wages less than $600k while having an average pay package including stock and options of $18.7M. So by a 2:1 margin, top executives avoid the current top tax bracket while being able to eek out a comfortable middle class existence.

In looking for salary and wage details I came across another IRS publication that was last updated using data from 2014. It showed the average adjusted gross income of the top 400 filers in the US was $317M, Of this, on average $18M was from salaries and wages. Meaning that in 2014, about 6% of adjusted gross income is derived from salaries and wages for this group. If we assume that these filers already paid the top 2014 marginal tax rate of 39.6% on the full $8M above the $10M threshold, these filers would pay an extra $2.8M (in addition to the $73.5M they already paid) bringing in a total of $1.1Bn, or .0002% increase in income for Uncle Sam.

These numbers will likely give support to both sides of the argument. After all, increasing revenue by $1.1bn is better than increasing revenue by $0. And the tax increase will not have any effect on the lives of the extremely wealthy. But my suspicion is that when tax rates become highly punitive, people will find ways to keep their money so the real numbers will be far less. And as one of the stated concerns is the income gap, this does little to address it. Elizabeth Warren’s proposal does address the income gap, but I really don’t see how that is implemented so I won’t focus on it here.

Oh, and regarding those CEOs that I mentioned who are likely to be thought of when the general public thinks of taxing the rich? Based on information in the latest filings, only Jamie Dimon would be impacted by the proposed taxes. Zuckerberg took home $8.9M in cash while Buffet received a $100k bonus with no salary and Bezos received an $81k salary with no bonus. So feel good – I suspect most reading this make more than Bezos and Buffet (and may pay more in taxes)!