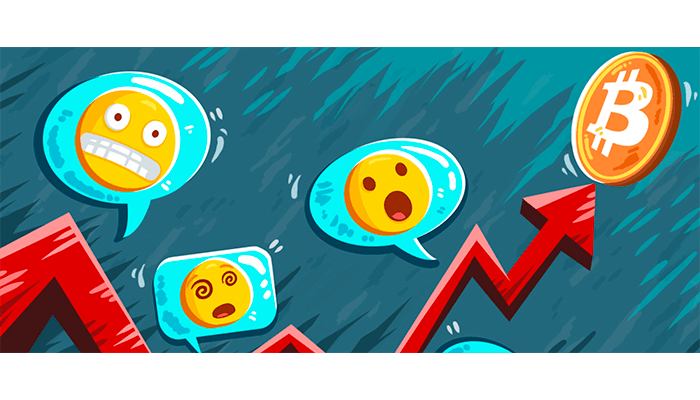 The Deep Internet: Why Bitcoin and Crypto Must Beat Centralized Platforms or Die

There is a great deal of content about cryptocurrency and blockchain, so why read this article? To put it simply, it will make sense of the future of cryptocurrency for you. Pretty ambitious. Did I forget Yogi Berra’s (or was it Niels Bohr) admonition that: ”Making predictions is hard, especially about the future”?  No, I did not. But I would argue that we can reduce the future of cryptocurrency to only two paths. Either cryptocurrency projects find a way to overtake centralized platforms such as Google, Facebook and others or crypto will remain a darknet curiosity.  I will focus on the first and a more productive path. I have no way of knowing where the history will go, but it is my strong conviction that you will see cryptocurrency and blockchain disrupt the Deep Internet. And it will not be done through endless speculation and hype.

I will show how cryptocurrency can be used to build platforms without corporate entities running them. To my mind, this possibility is the biggest benefit of the cryptocurrency technology and it holds a secret for massive value creation, which will have incredible benefits for the society as a whole. On the other hand, cryptocurrency cannot become people’s money or even approach that status in the current paradigm of a mere digital value transfer and storage. This is not nearly enough to become money and to compete with fiat currencies.

Platform is a kind of business that brings together producers and consumers of value. It typically owns no inventory, doesn’t produce anything. Instead it matches different sets of participants and mediates between them. Platforms have been taking over the business world for decades now. Facebook and Twitter match content creators with those who want to consume that content, be it relatives and friends checking out family photos, or someone reading news. Uber brings together taxi riders and drivers without owning any taxis. Airbnb brings together housing owners and travelers without owning any real estate. Google search engine brings together websites and web surfers, while YouTube… Well, you get the point. But established platforms have a nasty little secret that is now getting out.

In a 1984 movie The Gremlins, a struggling inventor encounters a small, furry and a very likable creature called the Mogwai (Gremlin). He takes one home, but is warned to never expose it to sunlight, as it will die. He is also warned not to throw water on it or feed it after midnight. Getting wet or fed after midnight turns this cute little creature into a rampaging monster.

Where was I? Oh yeah. When social networks like Facebook, Youtube and Twitter first appeared, they were cute little toys and it seems all they wanted to do was to give you lots of free stuff. But it looks like they were fed after midnight… Rampant blatant censorship, margin growth at the expense of creators, repeated violations of privacy to manipulate users, allegedly fooling advertisers with fake views and fake accounts (almost half of them according to a recent study). In a fantastic article “Why Decentralization Matters” Chris Dixon shared this illuminating and simple infographic. It is a polite way of telling my Gremlin joke about platforms.

My main thesis is that cryptocurrency technology must provide an alternative to centralized platforms in order to survive. Otherwise it will never achieve the necessary characteristics of money.

In order for something to be considered money, it has to satisfy three broad criteria. It must be a:

In Bitcoin’s history the focus has been on the store of value due to the limited supply built into the algorithm. It is viewed as a hedge against central banks ‘printing money’, a kind of digital gold. Clearly, this limited supply characteristic is crucial to Bitcoin, no argument there. However, in order to store value, something must have value in the first place. Limited supply feature of Bitcoin can create a public rush and a massive bubble, as we saw during the 2017-2018. The downhill stampede was just as stunning. This leads Bitcoin’s critics to reasonably ask: what value can you actually store in an instrument that loses 85% of its value in a year? Critics do have a point. There are certainly instruments that store value, but are not used as medium of exchange. Antique wine, paintings, collectible cars. But all of them have some significant and unique cultural meaning.

A Bitcoin cryptographic key does not! In order to store value reliably cryptocurrency must get there the difficult way, by actually building some value into it. We will soon see what this means in practice, but for now think of it like gold also serving as jewelry. If cryptocurrency has some built-in value way, it will naturally become a medium of exchange in people’s lives. However, when people talk about cryptocurrency and medium of exchange, they typically think of it as simply replacing traditional curency or payment systems like VISA and Mastercard. Hence endless arguments over whether Bitcoin can or should be used to buy your daily cup of coffee and replace credit cards altogether. Hint: not likely! Why would people use it instead of their credit cards? Cards are pretty convenient. Yes, they have high fees for merchants, but they do mediate fraud issues. Intermediaries in the cryptoFX world who would mediate and insure both sides against fraud would likely charge fees as well. I am not saying there is no value there, just that there is not enough obvious value for consumer to incur the pain of switching away from credit cards. So, is cryptoFX doomed to be a hedge against catastrophic failure of traditional central bank policies as it is now? If so, that would be pretty sad and limiting.

I believe there is another way. Cryptocurrency can disrupt centralized platforms the way those platforms disrupted traditional vertical businesses.

Platform businesses like social networks Facebook, Twitter, YouTube, as well as platforms like Airbnb and Uber thrive on their relatively low costs and efficiency. Passing these savings on to the users by giving them a less expensive or even free service is how they disrupted traditional businesses. But the picture is not static. Less of a Van Gogh and more of a window of a fast moving Tesla. Gigantic platforms of today captured massive market share during the period of low interest rates and easy capital. This enabled them to provide amazing inexpensive or free products to obliterate competition. Easy capital allowed to them to run on near zero profit margins and subsidize growth. Regulatory landscape with infinite financing allowed them to parlay this capital into virtual monopolies through buying any company that would threaten to compete. But the era of ultra low interest rates is slowly coming to an end. Public and regulator agencies are slowly waking up to the danger of these massive internet monopolies. However, in the absence of blockbuster growth, sky high valuations need to be justified with earnings and capital will no longer be free, so margins have to rise. This means that all users of the platform will be squeezed harder and harder to allow for these margins to materialize. Virtual monopoly position will enable this behavior, because any competitor offering a better service will simply be bought with massive cash stashes and regulators will look away (at least for the time being). The trend is unmistakable and I believe that the blockchain technology is just about the only thing that can offer an alternative. Why?

Essentially, cryptocurrency and blockchain is a pure platform technology. That is what it does. Its only goal is to bring participants and exchange value between them, with money being merely one of many kinds of value. Because a blockchain platform runs on computers of individual participants who do not need to obtain permission, it requires far less capital investment than a tech platform such as Facebook or Twitter. And because it is not owned by any legal entity, it cannot be acquired to make it go away. If someone wrests control of a decentralized platform to subvert its goals, the open sourced nature of the platform allows users to refuse to play along and stay with the version of the software they like. In other words, the future of a cryptocurrency platform is in the hands of the participants, while centralized platforms are fully in the hands of their owners. If such a platform can really be based on a blockchain with cryptocurrency as its native unit of value, then that cryptocurrency will naturally become a medium of exchange for value on that platform, thus fulfilling the crucial criteria of money. This is the only path where crypto will achieve this crucial characteristic of money and not in some hopeless competition with credit cards based on uncertain convenience. Just like there are many currencies in the world, so we can live with an ecosystems of hundreds of truly valuable tokens. But their value will not be based on hype and solutions to nonexistent problems, but rather on tangible value generated in the platform.

A picture is worth well more than 1,000 words, and this graphic summarizes my point. 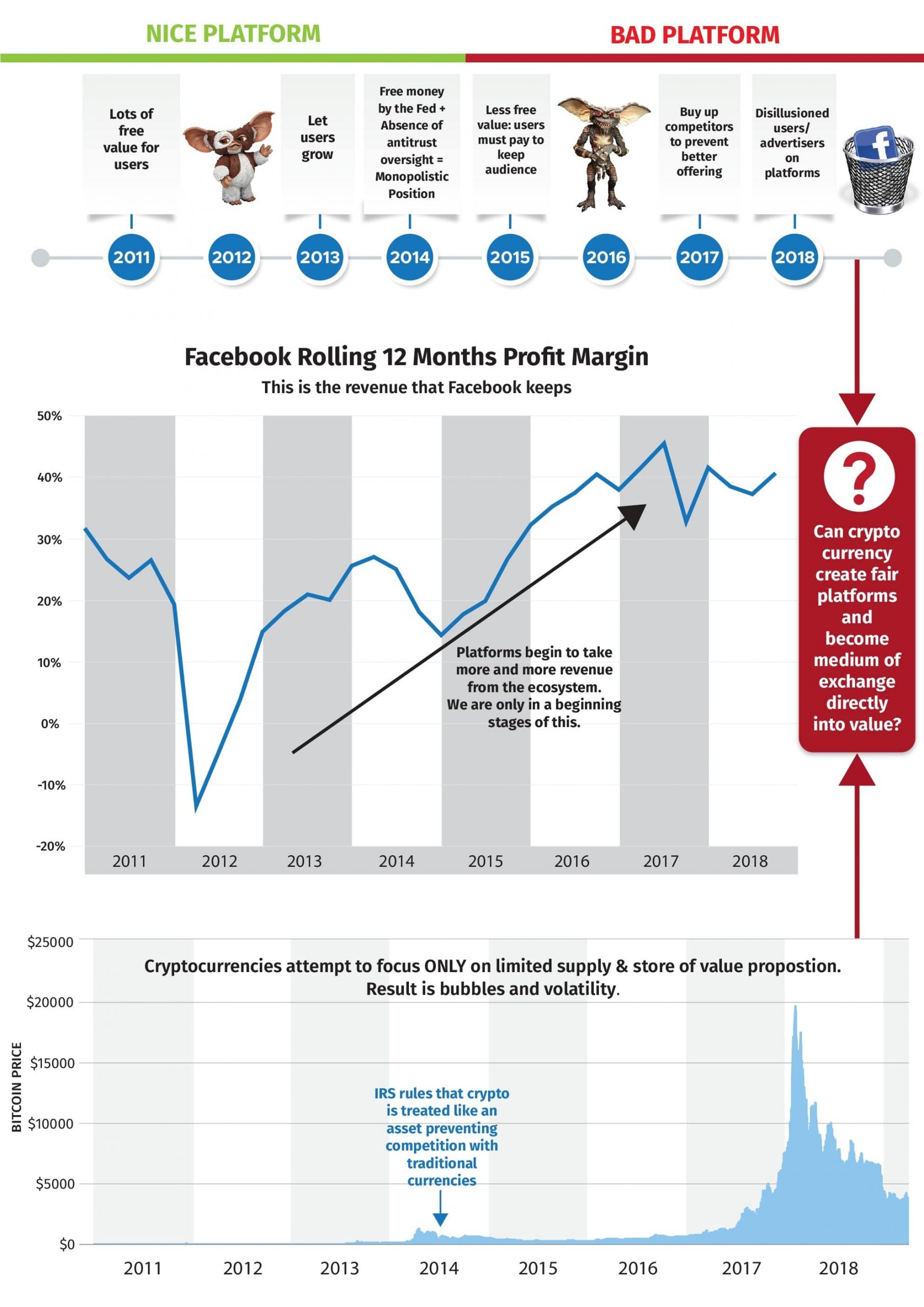 Cryptocurrency
What’s New in the World of Crypto? 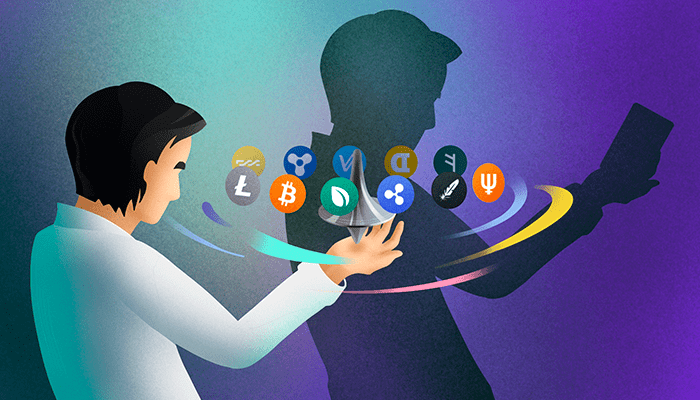