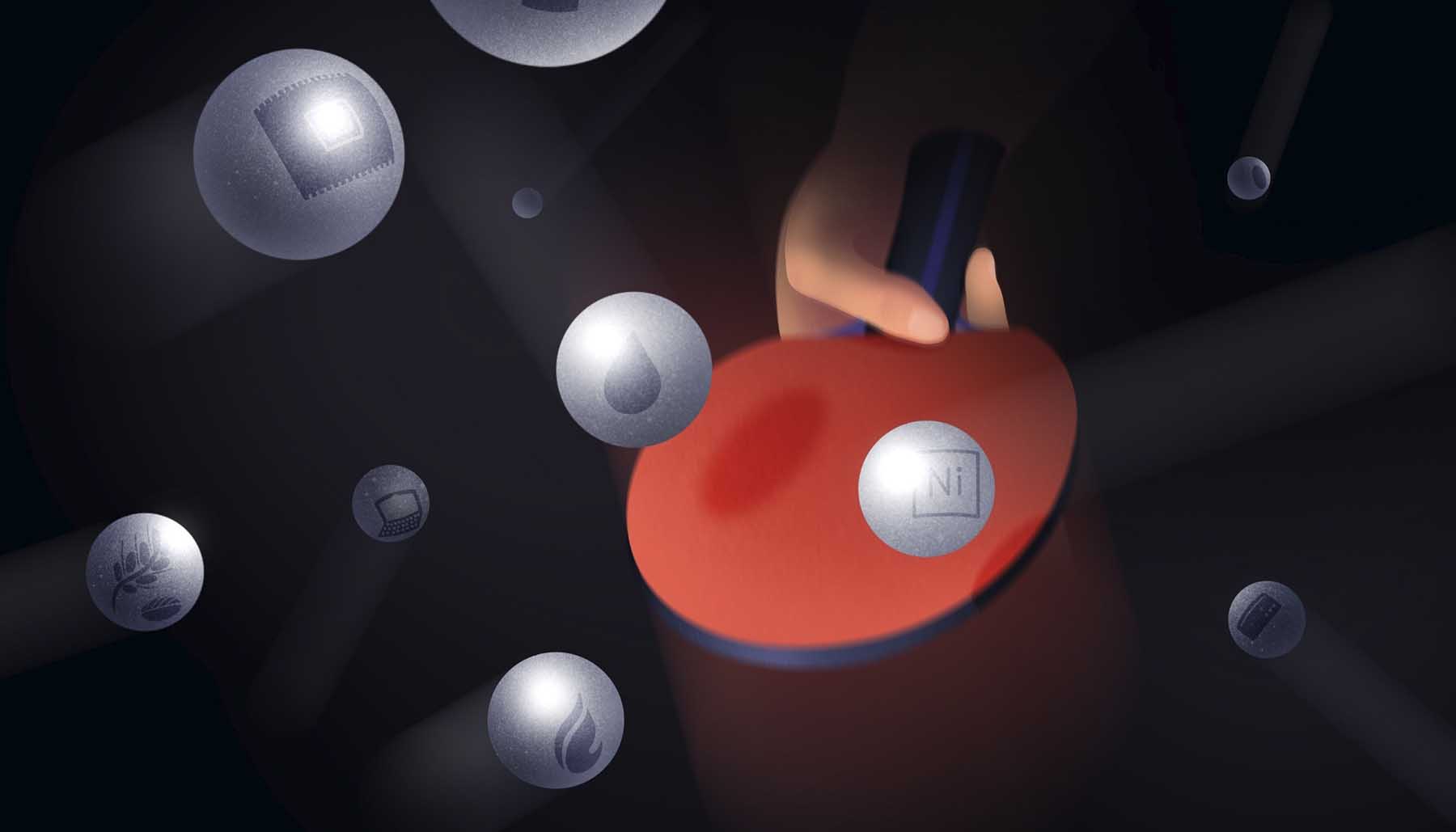 The Next Big Geopolitical Risk

Russia’s invasion of the Ukraine is affecting markets daily. We have created stress tests that have attempted to measure moderate and severe consequences for global markets as a result.

Even though that war is still raging as of this writing, this article will look forward to what could come next. For me, the next big risk is China attempting to annex Taiwan. Here is an interesting article that quickly summarizes the history of the “China-Taiwan divide”.

I was taking my time writing this as I consider this is a relatively unlikely scenario. But recent posturing by the US and Chinese in and around Taiwan could exacerbate tensions and rapidly escalate the situation. See here, here, and here for 3 examples of recent events in a long history of saber rattling that could be beginnings of escalations.

China could also launch this attempted annexation while the world’s focus is on the Ukrainian crisis with hope that there is no appetite to impose similar sanctions. The damage that would be inflicted on the economies imposing those sanctions would be severe even in isolation. Coupled with the damage being inflicted on the US and allies, particularly European allies, by the existing sanctions, they may well be right. But any attempt could surely not go unanswered, particularly by the US, which has vowed to support Taiwan against any Chinese aggression.

While I consider this scenario at a low probability event, it is an event that would have a very high impact to financial markets and should be considered.  This blog will not go into all the geopolitical events that could cause the crisis – there are people much more familiar with these sensitivities than I am. But the constructing scenarios to assess potential portfolio impacts in various scenarios is a critical function in a robust portfolio risk management process.

This scenario assumes that the situation escalates so that at least China and Taiwan’s military become engaged in conflict. The US, which has declared that it will defend Taiwan, may also get involved, though, as with Russia, I would expect that the US would have little appetite for a direct conflict with a nuclear armed China. The admirable job that the Ukrainian armed forces have done against the much more formidable Russians may also give hope that the relatively well-equipped Taiwanese military could replicate this success. After all, China has a strong interest in not flattening Taiwan in annexation meaning that the conflict could be more focused.

We will also postulate that the West’s (mostly) united front in sanctioning the Russian economy and oligarchs would be repeated in our scenario. But China and Russia are very different economically, politically and militarily. And the united response would also be uniquely tailored to meet these differences.

Economically, the primary differences between the Russian invasion of Ukraine and any conflict over Taiwan are of scale and impact. The size of Russia’s economy (measured by GDP) is only about 10% of China’s. The total exports of China’s economy amount to about $2.6tn per year versus Russia at $403bn per year and imports are about $1.7tn for China to $226bn for Russia. This makes imposing sanctions on Russia, relatively, a much easier proposition in terms of global impact. The graphic below comes from the OEC (which is a fantastic site) and shows the destination countries for China’s $2.6tn of exports. 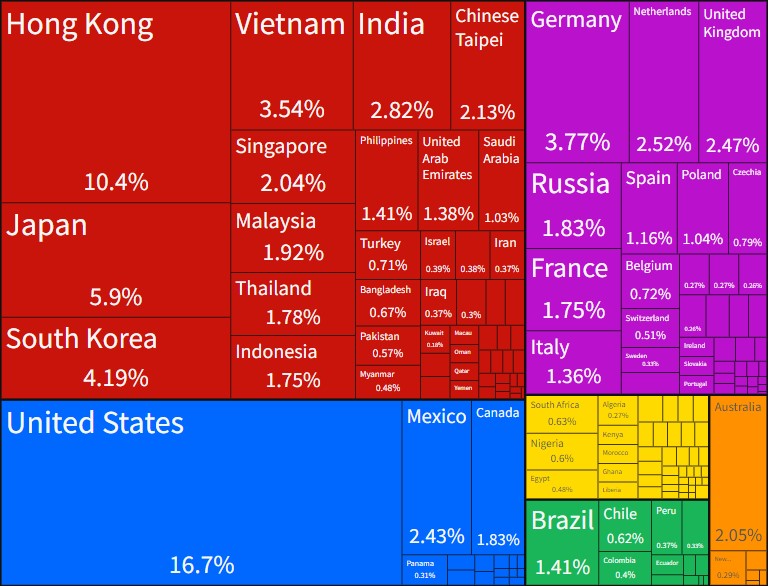 The types of goods being imported and exported by China and Russia are also much different and would impact global economies differently. Where Russia’s primary exports of oil, natural gas and wheat are readily produced by the rest of the world, this is not the case for China where almost 50% of their exports are related to computer equipment, semiconductors and other items used primarily in technological applications. These products can’t be replaced by some other supplier. The US and other economies were already experiencing inflation, supply chain disruptions and delayed shipments due to the global pandemic that were just starting to subside. The Russia/Ukraine conflict has made inflation much worse. A conflict related to Taiwan would make these issues much, much worse.

Then we have to consider the countries where the conflicts are centered, namely Ukraine and Taiwan. Here too we have two countries that are dramatically different in scale and impact, with Taiwan’s economy being about 4x the size of Ukraine. Ukraine is a producer of corn and wheat as well as iron products of a size large enough, when coupled with Russian disruption, to exacerbate an already strained global food supply, and hence inflation.

Taiwan not only supplies many of the same integrated circuits and other technological products as China, but China is their largest export market. Meaning that many goods produced in Taiwan go to China before being exported to other countries as product. Since these economies are so interdependent, any sanctions or disruptions may be magnified.

Given the disruption in food supply I expect that the Russian/Ukraine conflict will be a larger humanitarian catastrophe in terms of suffering and starvation. This is particularly the case in developing economies that will be the first to go without. But the rest of the world also produces the commodities that are Russia and Ukraine’s primary exports, and in large amounts, so the rest of the world may be able to make up the at least some of the difference. But any China related conflict would have a larger economic impact due to a lack of substitute product supply.

Given these facts and assumptions and knowing that the largest recipient of Chinese goods is the US (by far, taking almost 17% of all Chinese exports) and collectively Europe x Russia (taking 21%), the effect of this conflict would be quite different than what we are currently experiencing.  In isolation, this stress would, in my view, be far worse than the current Russian/Ukrainian conflict. If China attempts to annex Taiwan while the Ukrainian conflict is ongoing, the crisis will be far worse than an annexation attempt in isolation.

This scenario assumes that the conflict occurs while the world is still feeling the affects of the current crisis. It also assumes that the world will present the same united front in sanctioning all aspects of the Chinese economy and that the US will not be involved militarily. Neither is assured. Nor is it assured that multinational corporations that have pulled out of Russia would also pull out of China. Given that the West has played a strong hand against Russia, China will be either be deterred from action, prepared for the consequences, or bet that the West doesn’t have the stomach for a repeat performance of sanctions.

But assuming crippling economic sanctions and a significant rejection of Chinese exports by most of the world and a boycott by multinationals, the primary stress would be to the Chinese economy and market which I expect could fall by 70%. This is particularly true if the conflict lasts for several months. At the same time, the US semiconductor sector could fall by 60% which will, of course, impact other sectors, especially tech and automotive. The removal of China as a market for some key US and European food exports would likely cause soybeans to fall by 25%. Potential selling pressure on US Treasuries as, China is the second largest foreign holder of UST, would cause a 25bps upward shift in the yield curve even as investors flock to UST as a safe haven.

While similar geopolitical disruptions have had a much smaller affects than the one we model here, I do believe that there is the potential for a China/Taiwan conflict to much more disruptive with the effects much more widely felt. This is particularly true when taken in conjunction with the ongoing Russia/Ukrainian conflict.