Crazy Question of the Day: Will Bitcoin Ever Be a Fiduciary Asset? 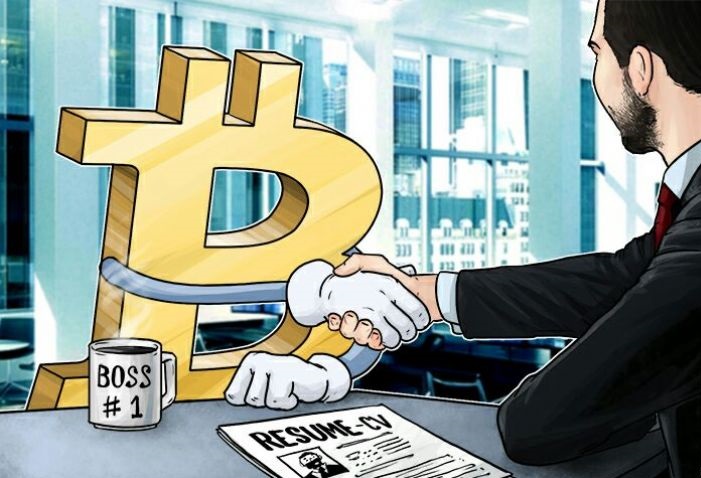 The mysterious Satoshi Nakamoto created Bitcoin (BTC), the first digital currency as a result of the 2008 financial crisis. Bitcoin blockchain is the first example of monetary system operating in a totally decentralized manner bypassing the regular financial system.

From the technological perspective BTC is a complicated endeavor that involves a lot of moving parts. We at RiXtrema always try to look at financial problems using quantitative methods and ask unexpected questions. The crazy question of the day is: Will Bitcoin Ever Be a Fiduciary Asset?

It may seem crazy today, but I am sure your clients are investing in it and possibly asking you about it. I hear from many advisors who need to answer questions about Bitcoin. In this research note, we will focus on some specific properties of Bitcoin, rather than getting into intricacies of blockchain.

Bitcoin has some very interesting properties. One is that it has limited supply (it was invented by a libertarian as an analog of digital gold). The other is that it allows the movement of money without capital controls, so it seems to be in demand wherever and whenever there is a financial crisis.

Another really interesting question is if Bitcoin can really be a diversifier. At least intuitively, if it really is in demand during financial crises, it should diversify and then there may be some hope for it.

Can we use BTC as a diversifiable asset that is at least somewhat immune to the total market? 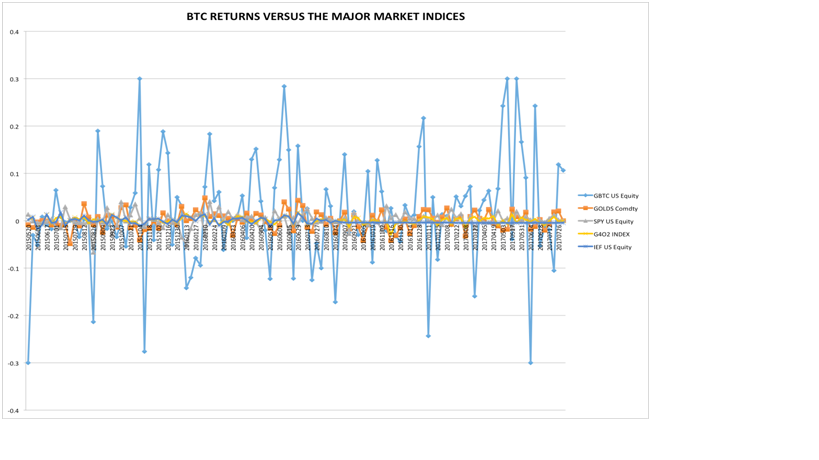 There are some basic conclusions we can draw from this graph.

Let’s look at the numbers. Despite correlation being moderate, a surprising result is that Bitcoin actually has positive correlation with S&P 500. That number is .18. So, it is far from a hedge against financial system disorder that many believe it to be.

Looking at volatilities, it is clear Bitcoin is not for the faint of heart.

Gold in fact has a somewhat negative correlation to equity, but even gold massively sells off whenever there is a real financial crisis (remember what happened in 2008).

According to anecdotal evidence bitcoin should be a diversifier. Our representation of BTC is the GBTC fund that is the main vehicle to invest in BTC for institutional investors (buying BTC directly is hindered by regulatory and technical difficulties).

Thus looking at correlations we conclude that BTC can serve as a moderately diversifying asset for the equity market, but the diversification is quite modest. Investing in Gold seems should produce better diversification effect as its correlation with the market -.07.

However BTC is also incredibly volatile. Indeed the volatility of BTC is 8 times higher than the volatility of gold and the volatility of the market, which are roughly comparable. Thus investing in BTC carries significant risks of market losses compared to the risk that is involved investing in gold as a diversifying asset. Interestingly looking at the Sharpe ratio of BTC, it appears off the charts strong. The Sharpe ratio for BTC is: 1.25 (Average return annualized return is 104%) and gold has a Sharpe ration of 0.2. (This for the historical period of our time series from 2015-2017.)  However, this is where we clearly hit a limit of usefulness for measures based on Modern Portfolio Theory, because BTC returns are very abnormal, while Sharpe ratio assumes an approximate normal distributions of returns and thus might significantly understate the risk of losses in BTC.

A recent event underscored the massive volatility inherent in bitcoin investing. In July-August 2017 we had multiple news about emerging civil war in the BTC that was connected to a technical issue called hard fork (more on that in the upcoming Blogs). Probably because of that BTC had returns of  +30% to -30% on a weekly basis during the time period between 05/24-06/14. Even with the volatility of 82%, these are a weekly 3-sigma event with normal distribution probability of less than 1%.

So, at this point Bitcoin and other cryptocurrencies is a purely speculative investment into a fascinating technology.

There are other diversifying assets without the nauseating volatility, such as gold and other alternative investments. Bitcoin is not a good fiduciary recommendation at the moment. However, with increasingly probable Bitcoin’s acceptance as a financial asset for institutional investing, it could become a much more stable asset and its moderate correlation with equities would be a bonus. We are still some time away from that point in time.